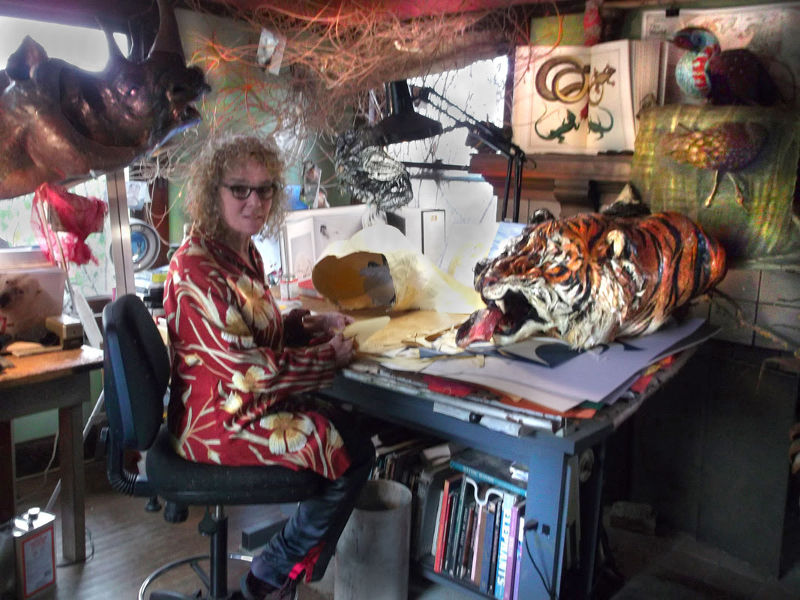 Many call Iris Polos ‘friend.’ ‘Teacher.’ ‘Sister.’ ‘Aunt.’ ‘Partner.’ ‘Inspiration.’ She joyfully embodied all of those roles. In her inherent kindness and generosity of spirit, she was a mother of sorts to many, but I stand alone in the honor of calling her my biological mother, and what a dear privilege to be her son.

A native of Oakland, CA Iris Stephanie Polos was born on Valentine’s Day in 1947 to Theodore and Catherine Polos, artists and immigrants from Greece. During childhood she scribbled and colored in the company of her father—a renowned painter dubbed the ‘Chagall of the West’—and as she grew so did her creative prowess—those scribbles becoming sketches; sketches giving shape to drawings; drawings blossoming into paintings; paintings becoming multidimensional sculptures; all of which remain with us as reflections of her grace. In short, she embarked along the path laid by her parents to pursue a career in the arts. But her first love was the animal kingdom. 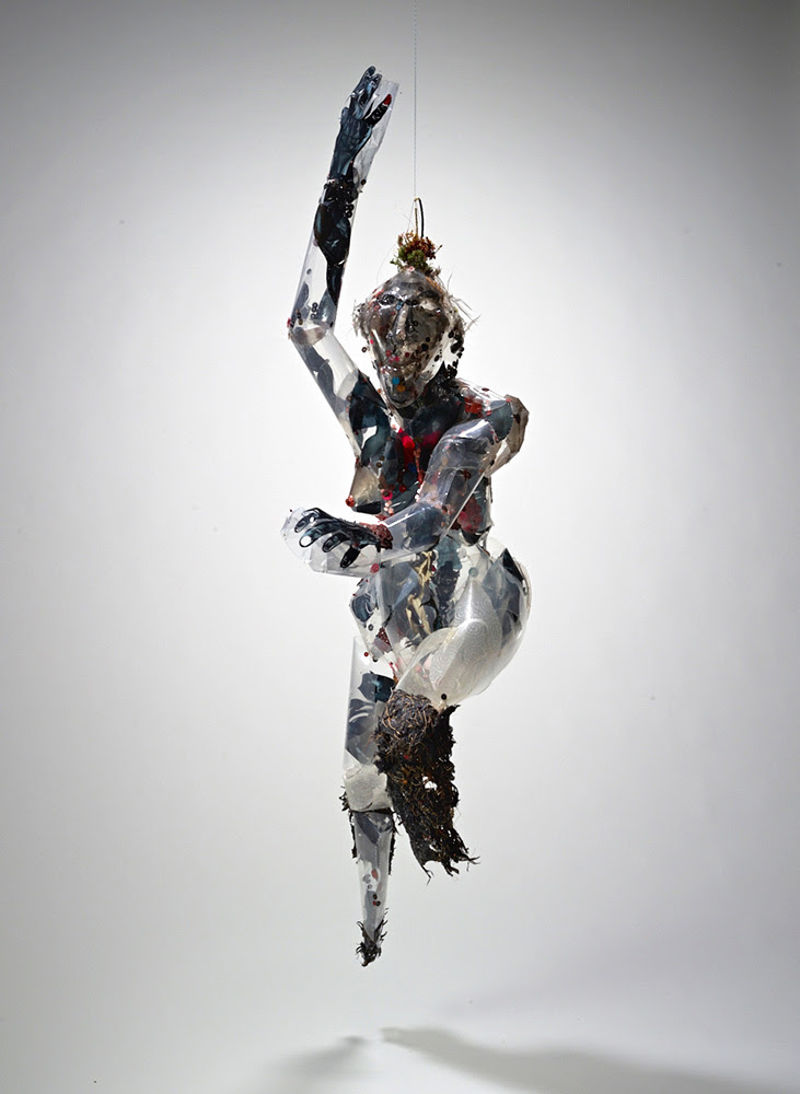 As a young girl vacationing with family in the idyllic seaside town of Pacific Grove, California, she and her friends often sought the company of animals—tracking chimpmunks, squirrels, and the like; for if anyone could evoke the essence of a Disney princess, frolicking whimsically through the woods with the wildlife enlivened by her every footfall—that someone was my mother.
Iris. Not Iris after the flower—though she was fond of those, too—but Iris as in the eye, and a Tiger’s Eye at that. Iris In a Tiger’s Eye she was so nicknamed in the hippie days. And the name was fitting; for her beauty flared fierce and her wild essence never tamed. She graduated with honors from Oakland Technical High School, and went on to earn both a Bachelors (1968) and a Masters (1971) from California College of the Arts. In addition to her art career, she was an arts educator at the elementary, high school, and university level. She taught Figure Drawing at the American College of Athens, Greece (1969-71), worked as an artist-in-residence at Chabot Elementary (1986-1992); and the Museum of Children’s Art in Oakland (1988-1996); art instructor at Oakland Children’s Hospital (1995-1996); and art teacher at Berkeley’s Arrowsmith Academy (1993-2006).
A prominent talent among Vessel Gallery’s artist roster since 2013, Iris exhibited her political surrealist work. Despite her often quiet demeanor, she possessed ample courage in allowing her art to address the political landscape of the day. Her work was recently added to the permanent collection at Berkeley Art Museum & Pacific Film Archive where it resides alongside an array of her father’s artworks. 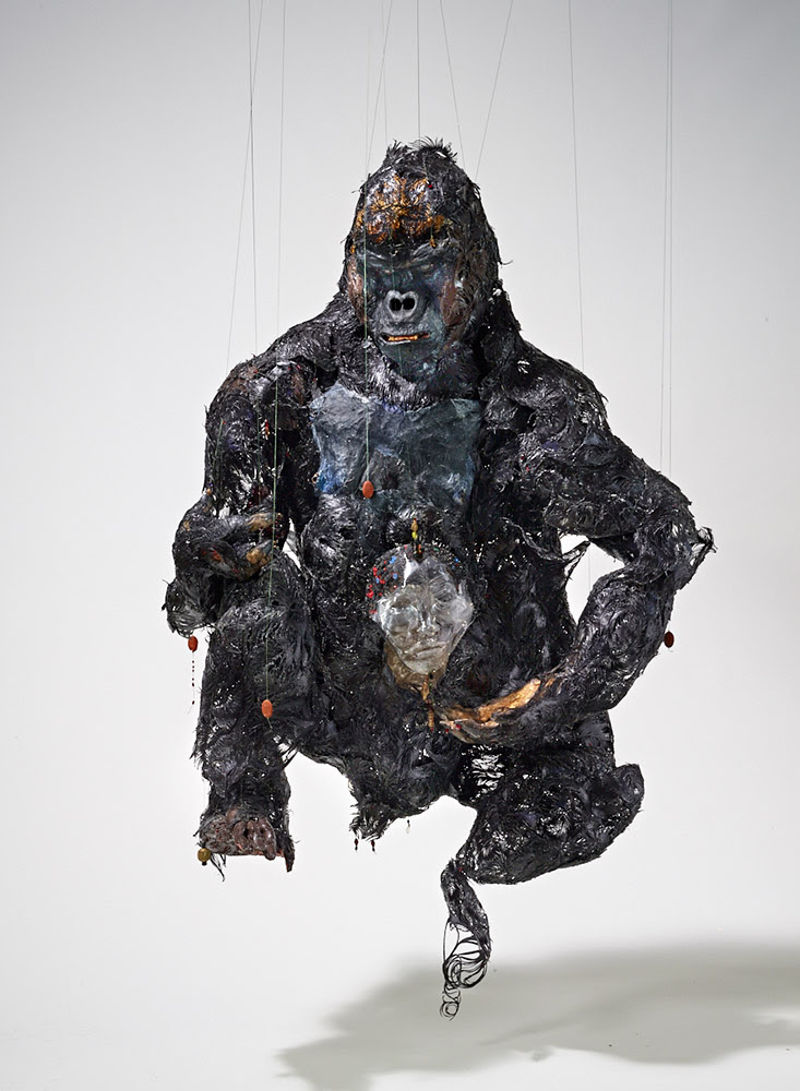 Amid all these accolades, she excelled greatest in motherhood. From the earliest days, our relationship was one of deep love. I was born two months premature, sickly and small. Perhaps I was in a hurry to meet my mother. Maybe I knew that the love awaiting me was a love just as fierce as the woman who gave it selflessly and continuously; perhaps I knew at some level below the surface, that as an ill child my mother’s love would be one that would both nurture and heal.
No doubt in part because I was a premature birth and an illness-stricken baby, our bond was in many ways built around reassurance; I sought affirmation that I was ok, my mother provided it and in those moments I felt safe. If I was ok, Mom was ok. If Mom was ok, I was ok. We gravitated toward one another throughout all of life’s trials and joys; a continual seeking and finding, and in the presence of one another we felt truly at home.
In the precarious days after a hospital visit, I recall that every night before bed I would ask, ‘Mom, where will you be?’ and my mother would reassure me of her presence in just the next room.’ As I got older she would ask in turn, like many a Greek mother, where are you going, son where will you be? And I would in turn reassure her of my whereabouts. 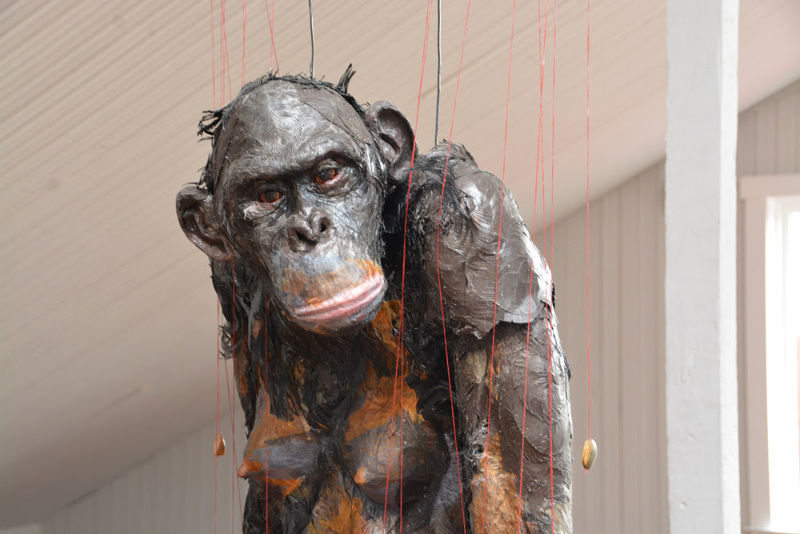 For every one of my triumphs in publishing, mom was my greatest supporter. For every one of my heartbreaks in the dating world—and there have been many, as we often, and playfully, bumped heads over her wish that I settle down and my insistence on putting my cassanova card to full use—she was there to lend wisened and heartfelt advice. With Mom nearby, all was well, always.

But when she got sick around this time last year, all was not well and I felt that for the first time, I had to face the world alone. Nothing could be farther from the truth, however, as squarely among the many gifts bestowed upon me by my mother is the gift of community, the essence of which fills this room now. She lived in way that embodied her philosophy that regardless of individual creative pursuits, real fame and recognition are found amid our inner-circle; when we live selflessly guided by love and light, we shine among those we hold dear. Testament to the fact is the sheer amount of people she brought together through her luminous glow. And we can agree that Iris’s radiance is unparalleled. 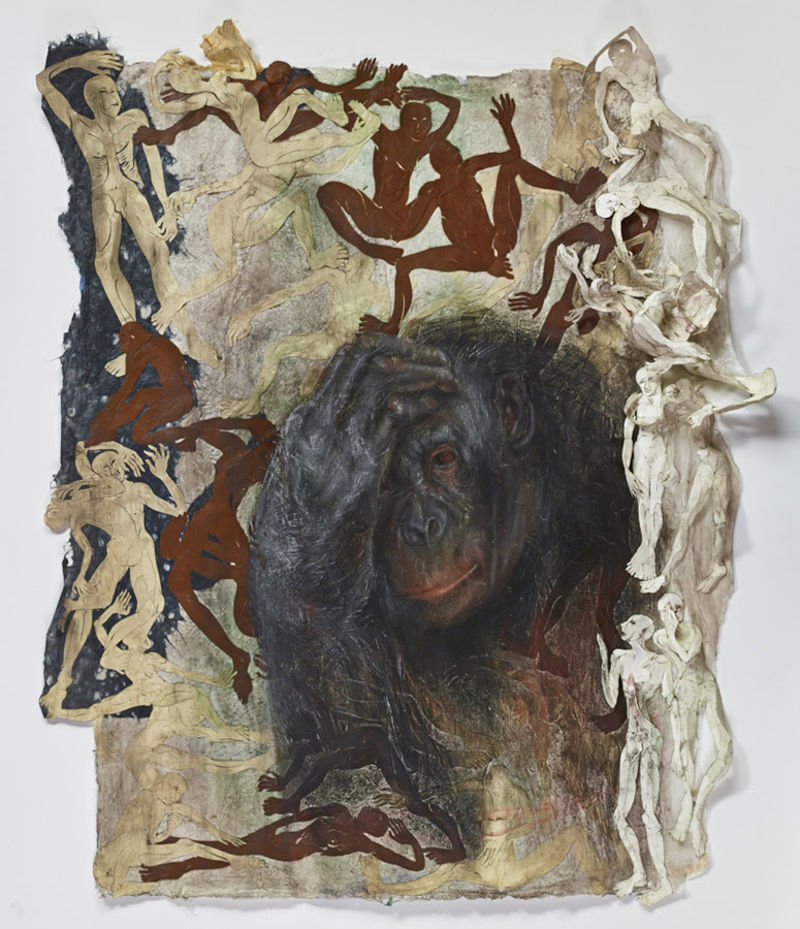 She called me her son, and her sun (s-u-n). For me, the loss is two-fold. There is the loss of mother… the light source, the life force, love unconditional… and then there is the absence of a confidant and comforter; a dear, dear friend. Apart from mother & son, Mom and I were just that: dearest friends. We truly cherished one another’s company. We spoke often at length of life and art. We visited museums and galleries together. My mother bestowed me with he immeasurable value of an appreciation for the visual arts. Gallery openings, hers and those of her colleagues were as common to my childhood as amusement park visits were to other kids, and even back then I wouldn’t have had it any other way. In contemplating canvases, we knew the question was not ‘what does this piece mean?’ but instead, ‘how does this piece make me feel?’
My mother taught me not what to feel, but how to feel with the heart and the senses. Our relationship was a rare one in which fights were almost nonexistent, and when we did argue our mutual respect was never lost or compromised. 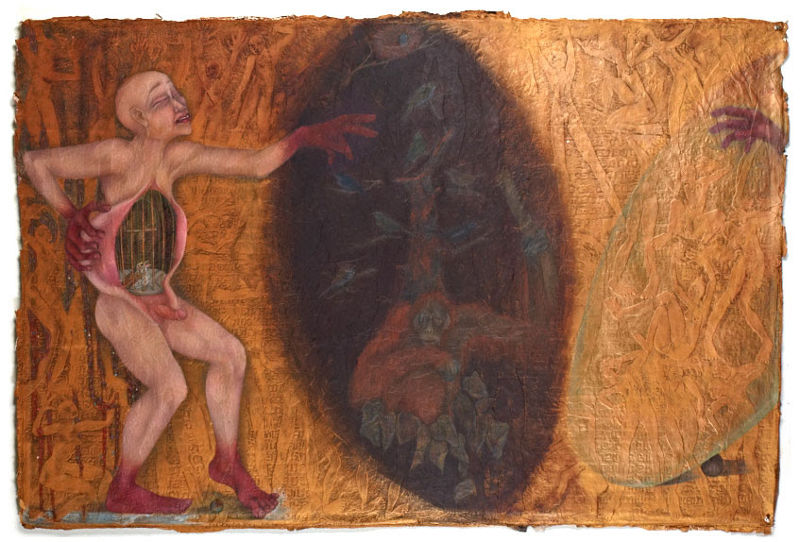 Caring for my mother in her final months and weeks was exhausting both emotionally and physically. Above all, however, it was an honor. What greater way to give back to what she gave me in my earliest days; what a beautiful way to hold space for someone I loved so, so much.
I’ve shed many tears. But most recently, I smile at the wealth of memories. Sometimes, I feel like I’m blowing alone in the wind, though her presence remains as an anchor to solid ground. Mom, while you’re gone now in the physical form, I will never stop seeking your guidance. Your face and your voice will ever be what I search for in my mind, if not in a crowd; Iris in a Tiger’s Eye; beloved mother home in my heart. 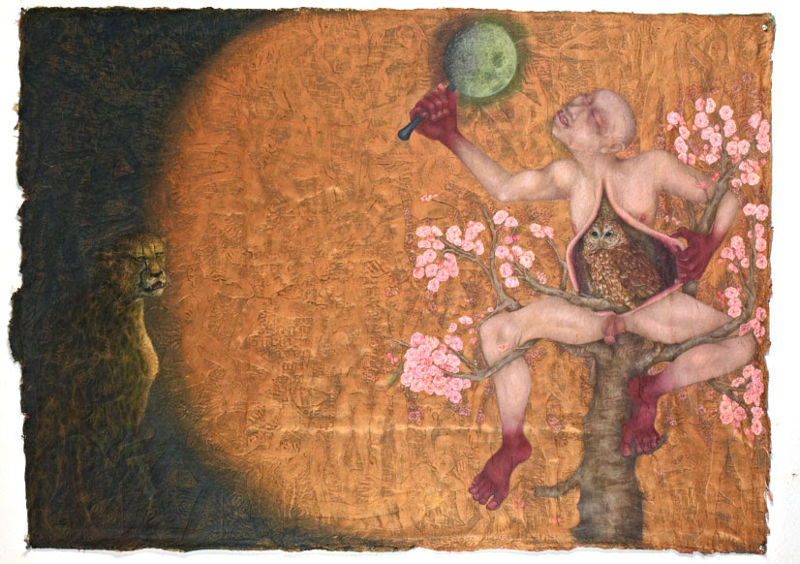 Someday
There will ascend sunrises you won’t see
Some day son will ascend to heights beyond reach
And through it all, you will be proud

Someday when you’re gone beyond embrace
he will keep a place for you, still
and in that shared haven,
for you and him both
shelter from the rain, if not the tears

The void won’t be filled,
somedays he will lose himself to the dark abyss
But those days too shall pass, making room for some brighter days
And the love of other loved ones will be his guiding light

But someday is far off
someday is not now,
nor tomorrow

Today
the sun rose over you and him both
together amid the beaming warmth
today, like yesterday
and the day before
You stood proud

When speaking of "the world" we often refer to only its human population.
Humanistic systems seem to strip other species of their sovereignty and numb our awe of them. My work strives to combat this very narrow view.
With the paintings I've attempted to keep the depicted creature connected to her natural environment, making habitats an integral element of the work.
The sculptural relief aspects of the paintings are made from cut and formed card stock paper and rubber cement.
They are then attached with heavy gel medium onto layers of textured paper on canvas and covered with colored gesso.
They are representative of a relationship of vital interdependence with the drawn animal. The drawing is done with Prismacolor pencils using a glazing technique traditionally used in oil painting.
Instead of thinking in terms of background and foreground I want to depict the true intertwining of each component, getting closer to a "realism" of what we see and how we all live in the world.
The freestanding sculptures are all made from colored paper and rubber cement. There are no armatures.
All are hollow and heavily layered, starting from one piece of paper. The process is one of cutting, using small curved scissors, and layering.
I use paper cement not only to glue one patterned shape onto another but also to give each shape a rubbery, pliable nature that is able to bend and attach onto itself. Taking many months to complete, a very deep relationship is formed in which the animal subject and I are in a dance.
I listen to her story as I tell my own. We are both revealed.