He was born as George Gordon Byron in London on January 22, 1788 but remained in history as Lord Byron. He was the son of the English Royal Navy master John Byron and his second wife of Catherine Gordon. He was of aristocratic lineage as his mother was a descendant of the King of England, Edward III. His father abandoned them due to financial debts and his mother was forced to sell out her property and the title of nobility to pay the debts. Their divorce was inevitable, Byron's parents were already separated before he was even born. Lord Byron was born lame and spent the first years of his life with his mother in Aberdeen, Scotland, rather poor, where he received his first education. His life changed radically when his grandfather's brother William Byron, known as the wicked Lord, died on May 19, 1798 and so at the age of ten he inherited the title of Baron Byron. Two years later he will be in a private London school where he will receive the appropriate education of the upper class.

Byron was a charming man with lustrous, sparkling curly hair and a nice posture, though a little lame from his right foot. His promiscuous love life made him infamous in London and his contempt for social conventions was the cause of various scandals. He had a daughter from his brief marriage to Anabella Milbank named Anda Lavelle, who became a famous mathematician, considered as a pioneer of computer science. From his relationship with Claire Clondon, he also had a second daughter Clara Alegra who died at the age of five. Lord Byron's personal life was utterly unconventional and a constant challenge to the morals of the time. His love affairs were many and not limited to the female sex.

With the encouragement of his friends, he began to write his first poems at the age of 17, which became known as the "Fugitive Pieces". The eroticism of these writings soon became a matter of dispute with some of the members of the community and so they were destroyed before they become widely known. His first poetry collection, "Hours of Idleness", containing many of Byron's original poems as well as subsequent compositions, received negative and anonymous criticism from the literary magazine Edinburgh Review, which held an important place in the literary world of the time. In response, Byron wrote his first satirical play "British Bards and Scottish Critics" (1809), which he first published anonymously. But very quickly the poet's identity was revealed and the reactions were intense, culminating in a call to a duel. In the meantime, however, it became a trend, and for some it was kind of a honor, to be at the target of Byron's pen. 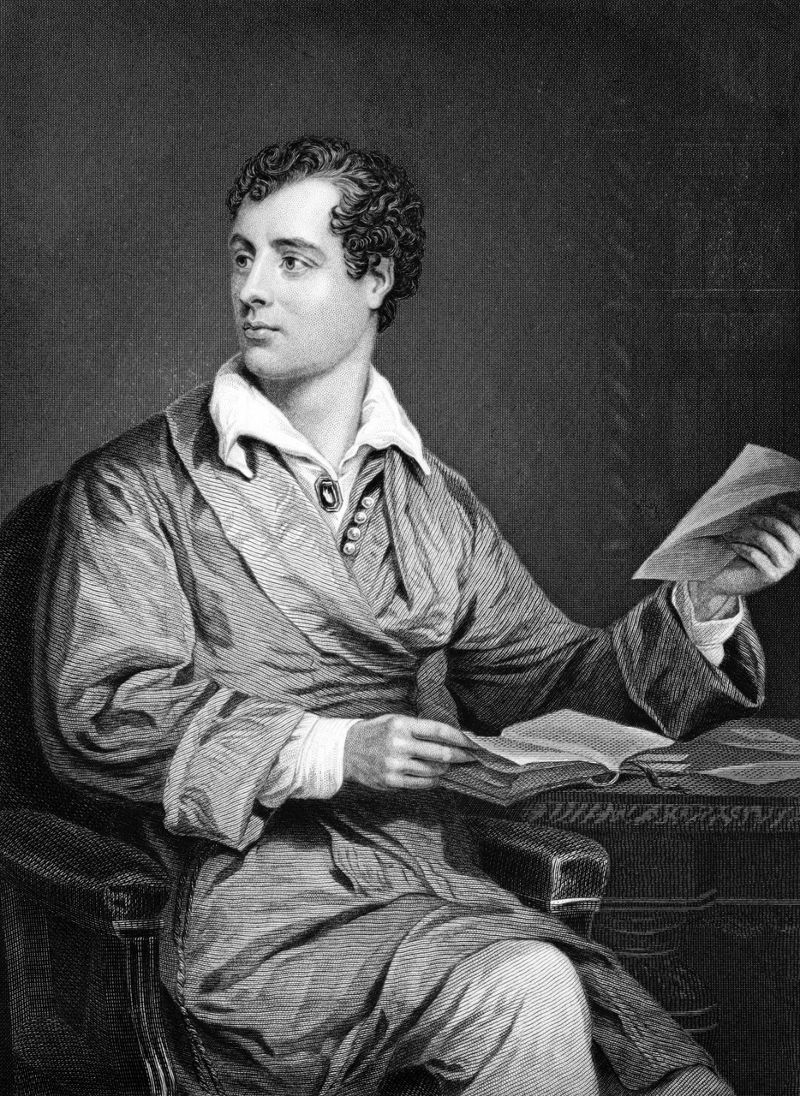 Byron met success with the poetry collection "Childe Harold's Pilgrimage" published in 1812 and became very popular, which made him a sought-after celebrity of the time. His success surprised even himself. The first edition of 500 copies was run out within three days, followed by six more releases in a month. The following series of poems focused on topics from the East in a collection titled "Oriental Tales", which contained the poems "Giaour", "The bride of Abydos" and many others.

Generally speaking, he was extremely wasteful and not at all financially sparing, so over time debt was accumulated and his creditors were constantly searching for him to repay it. As a result of his debts and his pursuit by former mistresses, Byron found the opportunity to start his big European tour by traveling to various countries of Europe, as the young English noblemen customary did after they came of age. With the Napoleonic wars in progress, he was forced to avoid several northern and central European countries, so he ended up in the Mediterranean Sea and finally in Greece.

From early on, Byron expressed his liberal ideas and he did not hesitate to support these ideas even in the House of Lords. Throughout his course he was supporting the working class and promoted the liberation of nations from all sorts of restrains. His strong support for the Greek Revolution, in which he actively participated, is obviously justified. 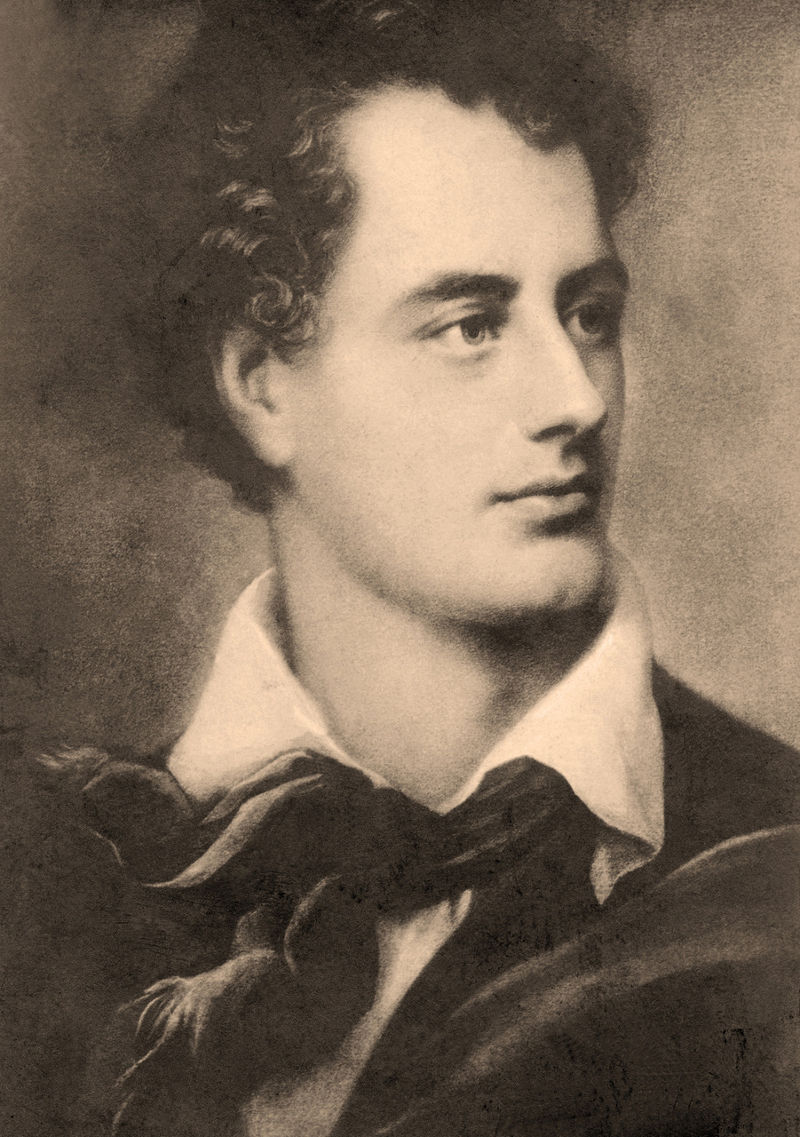 On August 3, 1823, he arrived in Argostoli. The Greeks were then divided, and that disappointed the sensitive poet. Having been appointed as representative of the "Philhellenic Comitato", he gave the rebels the supplies they sent him from London. From his own money he sent to Mavrocordatos 4,000 pounds for fleet maintenance.

On January 5, 1824 he arrived in Messolonghi, where the Greek renegades welcomed him with enthusiasm. There he co-operated with other foreign volunteers and at his own financial expense organized the army and took care of the fortification of Messolonghi.

On January 25, the government recognized him as commander-in-chief. But his efforts to organize the army and to reconcile the chieftains, as well as the existing tension, have exacerbated his health.

On April 9, he fell ill with severe fever. He was delirious, but even then he was urging the Greeks to reconcile in order to achieve their freedom. At the crack of Dawn of April 19, 1824, Easter Monday, he left his last breath, died in Messolonghi, at the age of 36. 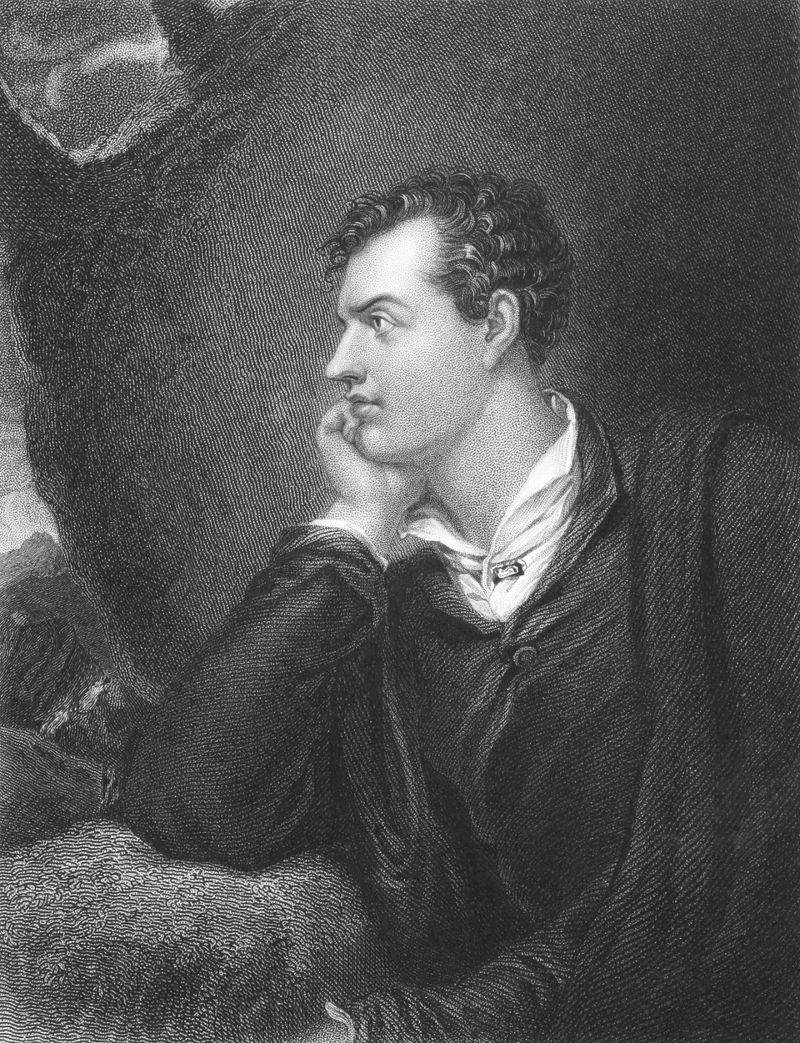 His death hurt deeply all the Greek renegades. Men and women grieved for his death, he became a symbol of patriotism and declared a national hero. After his funeral in Messolonghi his body was moved to London. On those days Dionysios Solomos wrote a great poem "On the death of Lord Byron" to honor the life and work of the great philhellene.