Saronic Islands The archipelago near Athens

It is true that most parts of Greece are ideal for any person seeking a place to spend a vacation. However, the experience in southern Greece is way better since it ushers in a different environmental setting. It is here that you will come across the famous Saronic Greek islands. They were named as such since they are located in the Saronic Gulf, and they are just a short distance from the mainland. The manner in which the islands are separated and located is simply a confirmation of how incredible nature can be.

Over the years, much has been done to turn the islands into tourists' destinations targeting Athenians and even the larger Greece and the world. Today, the Saronic islands are coupled with different attractions, which are not only entertaining but also educative. The connection from Athens to either of the islands is highly convenient for any person. The atmosphere surrounding the islands is also serene enough to accommodate even foreigners. Above all, the islands are covered in pure natural beauty with some of them bearing native and exotic flora and fauna.

Without further ado, let us have a close check on the 7 Saronic Greek islands: 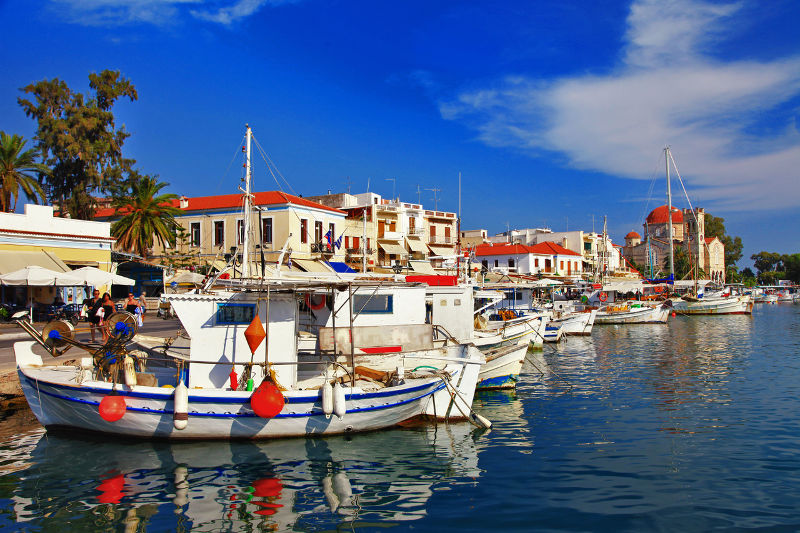 Did you know that this is one of the most popular islands in Greece? It is among the Saronic islands that attract a large volume of visitors on holidays. The reason behind its undeniable popularity is its proximity to the city of Athens. Considering that Athens is the capital of Greece, and the population in the city is dense, the island is bound to attract large volumes of visitors both locally and internationally.

Aegina was named after Nymph, the daughter of a river god. She fell in love with Zeus and headed to the island. As a result, the island was named Aegina. It might interest you to know that after the state of Greece was founded, this same island served as the capital of the place for approximately two years.

The island is home of rich Greek history, and that is why you are bound to come across landmarks that date back in the years of Ancient Greece. Among the places that might interest you here include; Aphea temple, archaeological museum, Christos kapralos Museum, and Governor Kapodistrias Residence. The ‘holy triangle' is also found in this island. Get ready for an experience that goes beyond the usual when touring the Aegina Island. 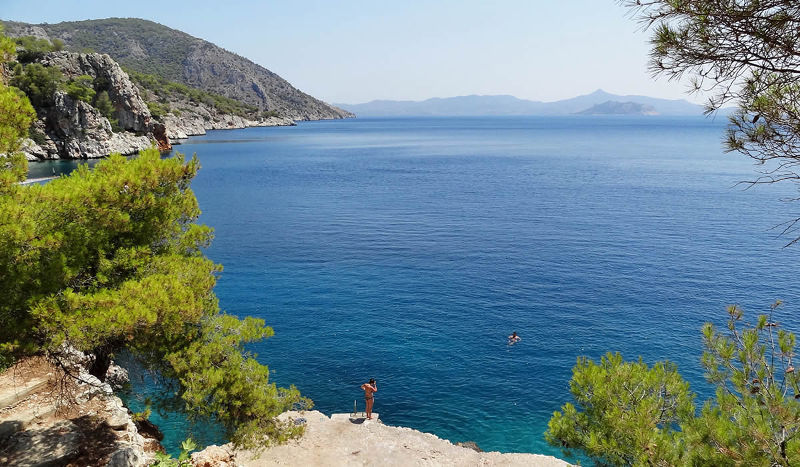 The island rests 16 Nautical miles away from Piraeus, hence rendering its accessibility convenient for any person. It is however not as large as other Saronic islands in Greece. The island holds a capacity of fewer than 1,000 inhabitants, hence making it friendly for tourists since it is not densely populated.

One of the unique things about this island is the natural vegetation it features. The tiny island is home of assorted species of plants including lush vegetation and pine trees. Azure waters are also part of the complementing elements to the beauty of the island. Be ready to witness different bird species that find refuge in this island. Aside from that, the island provides you with a guarantee of the best experience along the beaches, including Skala, Skliri, and Chalikiada. All the said beaches feature crystal clear waters in which you are at liberty to embark on your swimming lessons. 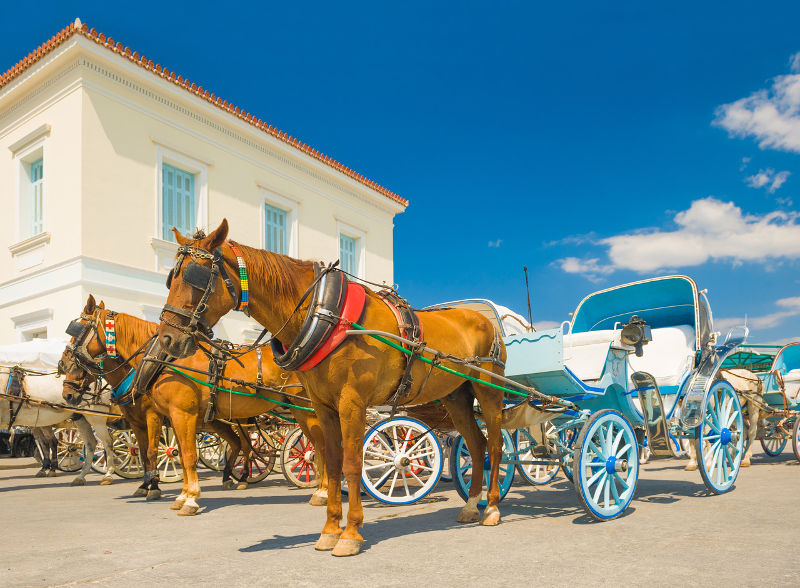 The island has for the past years evolved to become one of the most appealing and attractive among other Saronics. The modern architecture gradually dominating the island is a confirmation that there is indeed large development taking place there. However, the recent development in the city has not in any way wiped the historical aspect of it. Most people may not have an idea that this island was of a significant role in the 1821 war in the quest for independence. In this regard, the island holds an unshakable and immense naval tradition and history. The revolution flag was raised right on this same island.

The grand captain mansions have been the major pillars supporting the retention of its great historical past. Dapia and Picturesque Old Harbor are considered the main heritage landmarks of the islands from where the image of the past can be made. If you are interested in having a traditional grip on the island, you can schedule for a visit there in September and witness the re-enactment of the naval battle. This is one of the significant Greek events that have been taking place since 1931.

Aside from that, you can take strolls around the streets of the islands and enjoy a clear view of both modern and ancient architecture. Among the prime landmarks found here include; cathedral of Ayios Nikolaos, The house of Bouboulina, The house of Hitzigiannis, and The Church of Panayia Armata. It is indeed a significant place to crown your vacation. 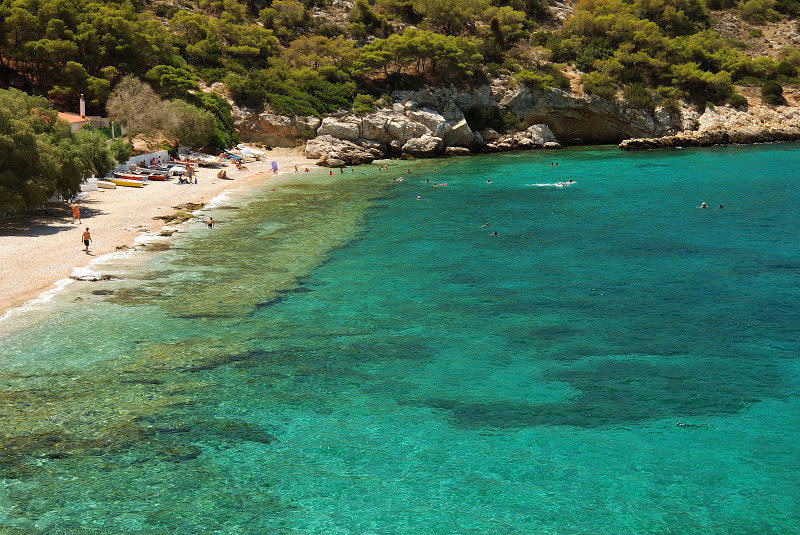 It is yet another Saronic Island whose history is linked with the river god, Asopos. Myths concerning this island claim that the name Salamina was adopted from one of the five daughters of the river god who was named Salamina. One of the unique things about this island is that it features a lot of elements that best paint the picture of Greece history. This makes it ideal for visitors whose interest is on historical aspects and general sightseeing.

The Folk Art and History Museum is a perfect place for those who wish to understand the history of the island. Here, you will find a collection of costumes, traditional tools, ceramics, and even weapons that were used in times of war. The maritime museum located in this island exhibits the different ancient vessels that were used in the past, including cannons and torpedoes.

Aside from the historical sites on the island, you can opt to go swimming along the beach within the shore. Beaches here are immaculate and accommodative. Among the beaches that you should consider visiting include; Selinia, Kanakia, Vigla, and Saterli. 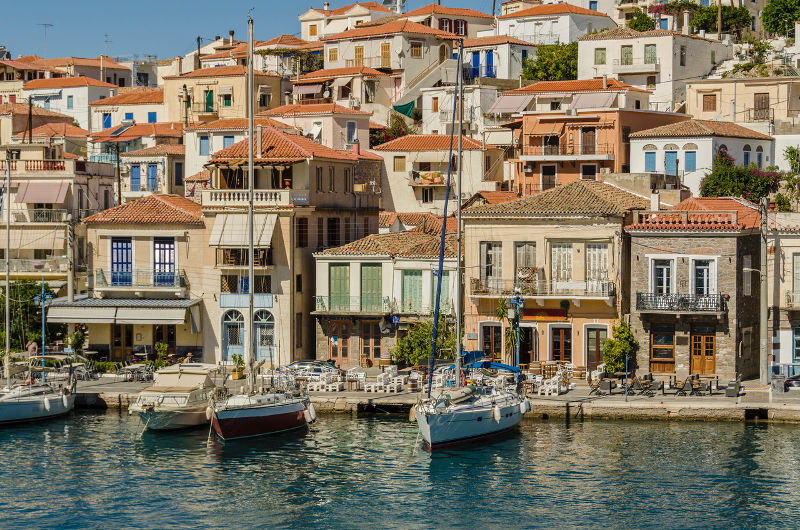 Poros is also among the Saronic Islands whose domination is more on the historical aspects than modernity. However, the historical elements presented on the island are not past 273 BC. It was then that a volcanic explosion hit the island, hence changing the more significant part of its morphology. The beauty of the island, however, is still preserved.

Here, visitors are assured of the best vegetation, coupled with pine trees and other species. Aside from that, the island is surrounded with crystal clear water, ideal for any person who loves swimming. The sands around the island are soft and tender, hence offering visitors with the best environment to sunbathe.

For fruit lovers, this is undoubtedly the place to be. You will be tempted to take a stroll through the lemon forest located on the island. The island is a home of more than 30,000 trees of both lemons and oranges. You might be lucky to find the ripe fruits and take some along. It would also be ideal for you to take a walk to the hilltop. Here, you will get the most stunning view of the island and the gulf.

Do not forget to book for a boat sail around the island. There are a lot of things to view as you cruise along, including the old palm trees and the lush pine trees. Not to mention, the serene environment and the atmosphere around the island is highly captivating. This is the kind of place that you can spend the entire vacation without tiring. 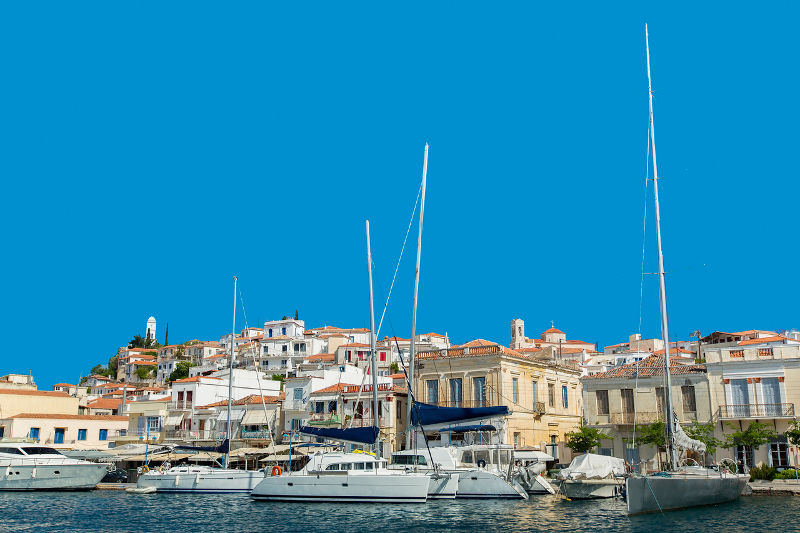 Have you been yearning to explore a volcanic landscape? Methana is the chance you are looking for. The island came as a result of volcanic explosion coming from the sea many years ago. The best part is that the landscape is not a mere volcano. Soon after the explosion, vegetation cover came forth with different species of plants. Birds of different species have since found refuge in this island. This means that you can plan for a stroll within the island and enjoy the captivating atmosphere it offers.

The popularity of the island was made stronger upon the establishment of the Spa Complex in 1870. This landmark has since attracted individuals from the European countries, especially senior citizens.

How about climbing to the top of a volcanic crater? Well, this might be quite challenging, but it is worth it. In fact, if you wish to engage in a friendly workout, this is the challenge that you might want to take. This is the most massive volcanic crater you will ever come across. The different stages along the path will give you time to catch your breath as you view the gulf from above. Upon meeting this challenge, you can climb down and spend time along the volcanic beaches. The experience there is utterly soothing. You will love it! 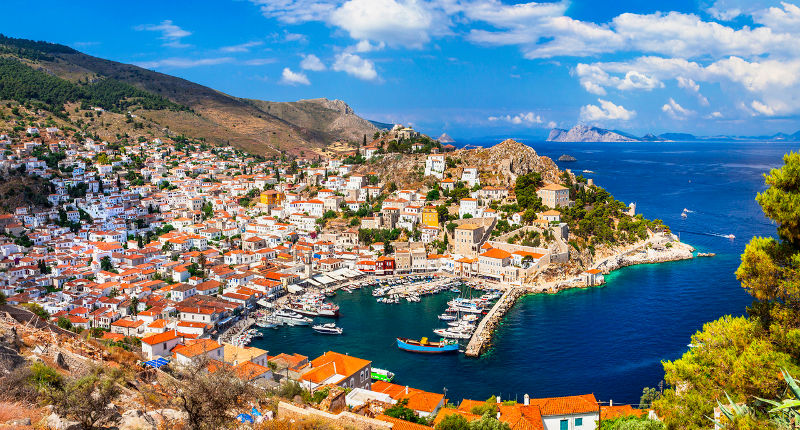 Hydra has for a long time been regarded as one of the most romantic Saronic islands in Greece. This is so especially since it features the best architecture and an excellent viewpoint for the gulf. In fact, the island presents a blend of both traditional and modern architecture hence satisfying any visitor making way there.

The traditional stone mansions narrate the history of the island to a large extent. From them, you can figure out the dominating architectural designs of the past. For a long time now, this island has been on an economic growth trend courtesy of the extensive business activities that take place there. Since 1821, the island has always been attracting people who have immense interest in business, and this is why the site exhibits remarkable growth today.

You might want to head there with your lover and take a yacht ride around the island. The place is the home of ancient and modern yachts, designed to offer comfortable rides for a visitor.

History is also amply preserved in the various museums found on the island. Among the museums you should consider visiting when in the Hydra island are; Historical Archive-museum, national historical museum, and Byzantine Museum. All these present assorted elements that narrate the past and historical events that took place in the island, including weapons used in the 1821 war for independence.

Upon completing your tour through the museums, you should consider taking a stroll or even a romantic sail along the sweet and serene beaches on Hydra Island. Aside from the sunbathing and swimming experience along the beach, there is also exciting history there. Some of these beaches played the role of docking points for warships and yachts. Mandraki is a perfect example of such beaches. In a nutshell, Hydra has a handful of experiences, which will undoubtedly crown your vacation. 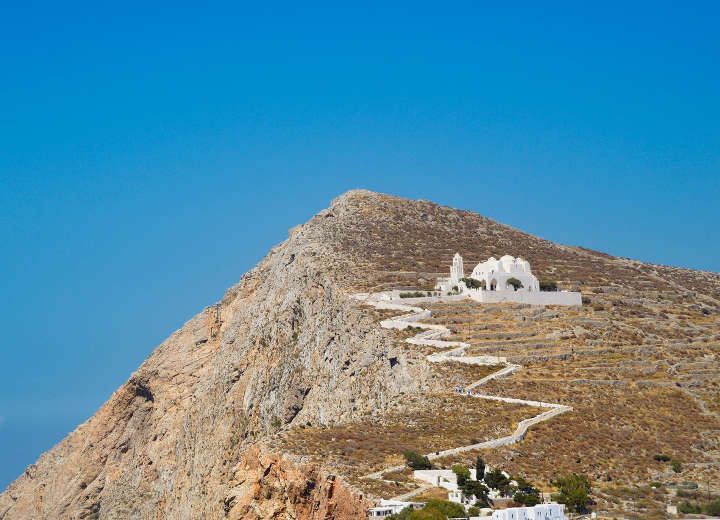 Great and Memorable Moments In The Authentic Greek Island 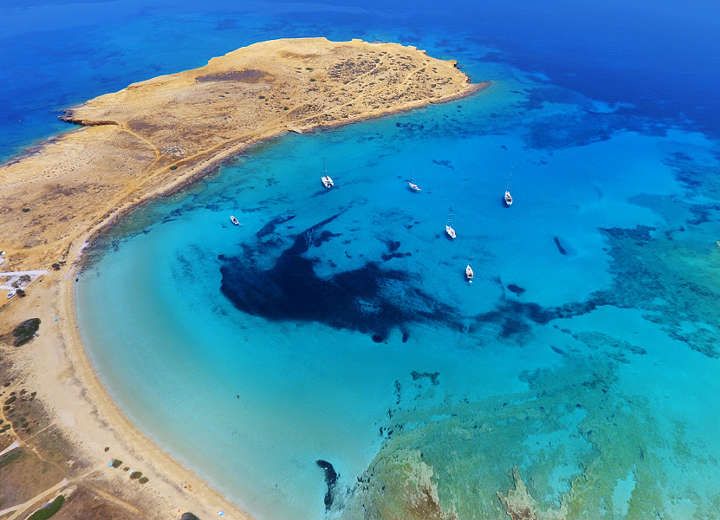 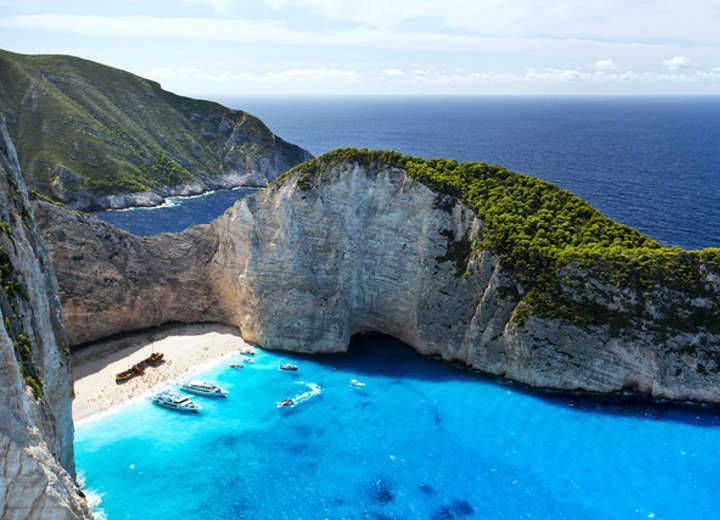 Are you wondering on the best place to spend your next holiday in Greece? 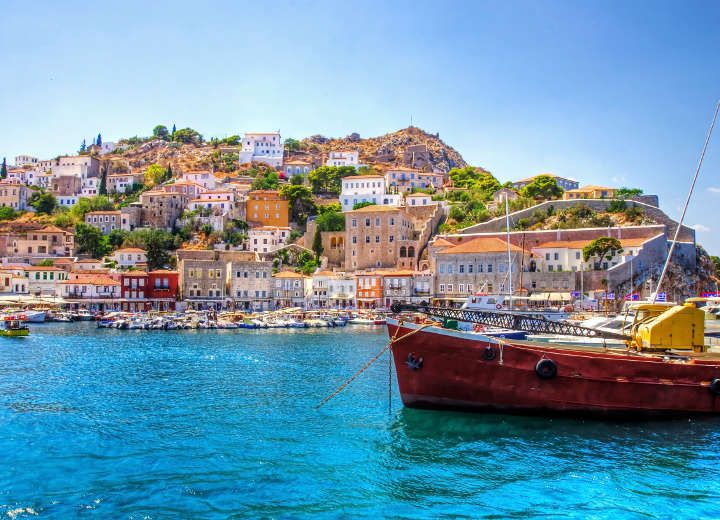